WHY NOT DREAM BIG

If you’re going to dream, why not dream big?

That’s the attitude of young Manly 16ft Skiff Club skipper Felix Grech and his crew as they negotiate their way through the 2016/17 season. Aboard Korman Marine Composites, Grech steered the boat to an impressive win in last Saturday’s second pointscore race of the season. The 47-second win could be a pointer to bigger and better things in the coming months. “We want to place at the nationals this year and the club and pointscore races are good training for that,” Grech said. “It’s super competitive at Manly and the young guys are out to push the big guys as much as possible.”

KMC got off to a terrific start in beautiful conditions last Saturday, easing away from the rest of the fleet alongside Brydens (Gerard Smith) and Holmes Marine (Matt Stenta). Stenta took the lead on the second lap and looked on track for victory before Grech and his crew Paul Darmanin and Tom Potter came at him again, regaining the lead and holding on for an important win.

It was a particularly sweet for Darmanin, who was up against his Olympic medal-winning sister Lisa aboard CHPS. “He was keen to beat Lisa – we all were,” Grech laughed. “It was a really tight race, very tactical, and we were always getting pushed. “We couldn’t relax for a second so to come back and win it was very pleasing.”

The third pointscore race of the season will take place on Saturday afternoon. 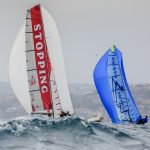 I AM NOT GOING TO SAY TOO MUCH16ft Skiff News 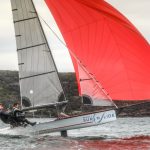