I AM NOT GOING TO SAY TOO MUCH

For fear of putting the mock on his boat, Holmes Marine skipper Matt Stenta won’t be making any bold predictions heading into the final two heats of the NSW 16ft Championships this weekend.

Stenta bravely declared Holmes Marine would be chasing a top three finish on Middle Harbour, only to fall short in both heats earlier this month.

“The last time I said we wanted a podium finish we ended up coming 12th (and 8th) so I’m not going to say too much this time,” he said with a laugh.

“It should be a good regatta and we’d be over the moon if we could finish inside the top 10.

“That’s not out of our grasp if we sail well.”

Holmes Marine is placed seventh overall and could even sneak into the top five with two good results.

Manly’s Fire Stopping (Joe Turner) has one hand on the silverware after winning the first two heats.

As long as Turner keeps the boat out of trouble and among the top placings, Fire Stopping will be celebrating its first win state championship since 2009/10.

But Stenta and crew Gus Williams and Jackson Cranfield go into the deciding heats in good form after taking out race nine in Manly’s pointscore series last Saturday.

They led around the first top mark only to lose the lead to Fluid Building (Clint Bowen) by the second lap.

That allowed Holmes Marine to make up considerable ground and challenge Fluid for the lead.

When Bowen lost his tiller as a result of the close encounter, Stenta made his move and eased away for a tight win.

“It was pretty close the whole race and it was only over the last couple of hundred metres we got him,” Stenta said.

“It was a mix of good racing and a bit of luck on our part.

“We were really happy with the way we sailed that race because we tried a few different things and it all went well.” 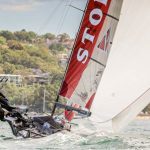 BACK TO BACK16ft Skiff News 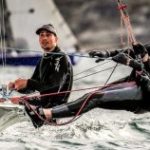 WHY NOT DREAM BIG16ft Skiff News