Brother Versus Brother turned into a fizzer……

It was billed as brother v brother – a friendly family showdown to determine the leading skipper in Manly 16ft Skiff Club’s fleet.

But the race for the club championship turned into a fizzer after challenger Daniel Turner, steering Sutech Building, was unable to keep pace with sibling Joe, skipper of series leader Manly Surf n Slide in last Saturday’s final heat.

Sutech needed to beat Surf n Slide to have any hope of narrowing a two-point advantage on the overall pointscore, but struggled from the outset to finish a distant 19th.

Almost 12 minutes separated Joe from his brother in an anti-climatic finish for those hoping to see a real fight to the end.

Not that Joe was apologising for the ease of his win.

“They (Sutech) got a shift wrong on the first beat and got deep and it was going to be near impossible to get back from there,” he said.

“I guess it was a bit anti-climatic for the neutral observer but we were happy with the way it turned out.

”I hadn’t won a heat of the club championship this year – James Dorron filled in when we did win one – so I didn’t want that hanging over me.

”(Crewmates) Rob (Napper) and Trent (Barnabas) did a great job to get us home.”

After returning to the beach, Turner announced he would be hanging up the 16s harness to pursue other opportunities.

“I’m going to take up lawn bowls,” he joked.

“No, I’m just going to take a break but I’d never rule out a return down the track.

“No, I’m just going to take a break but I’d never rule out a return down the track.

“It’s been really enjoyable sailing with Rob and Trent and a nationals and a club championship is a good way to go out.”

Surf n Slide was a model of consistency throughout the club championship, finishing with four seconds, a third and two wins. 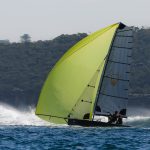