Old and Slow and the young blokes smash us….

Ross Bell has never been so happy to be ignored in his life.

The long-time Manly 16ft Skiff Club sailor wrote to the race committee asking for a revision to his handicap time after going two years without a win.

He dropped the letter off at the club and headed out to sail in last Saturday’s pointscore race, unsure whether his request would be met.

He had his answer a few hours later after piloting Ross Bell Electric to a handicap win in a light nor easter.

He will now get a handicap adjustment – just not the one he was after.

“No-one was in the office when I dropped the letter off so I’m not even sure anyone read it,” Bell said.

“I wrote that we were old and slow and the young blokes were smashing us and we needed our handicap revised.

“They can rip that letter up and put it in the bin now. We won’t be getting any favours now.”

At 57, the popular Bell is in the veteran class at Manly.

His love for the sport keeps him coming back year after year despite the victories drying up.

“And that’s what they are – moments.

“We got a seventh in the first heat of the nationals and then came 58th in the next heat.

“That pretty much sums it up. It’s a very tough fleet at Manly and it’s so hard to win a race, which is good.”

Bell thought his win drought was going to continue after trailing Namotu (Matthew Taylor) for much of last Saturday’s race despite enjoying a healthy handicap.

What he didn’t know was Namotu had gone to the wrong bottom mark on a couple of occasions.

“We got a got a good jump at the start but I was wondering why they were getting further ahead of me at Balmoral,” Bell said.

“It all made sense when I heard they had gone around the wrong mark.” 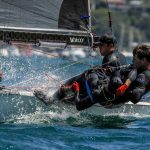 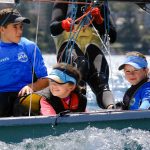 It is the highlight of the year…….16ft Skiff News, Manly 16ft Skiff Sailing Club