By Manly 16s
Posted November 14, 2017
In 16ft Skiff News, Manly 16ft Skiff Sailing Club
Lee Sails leads the Manly Charge2017-11-142017-11-14https://manly16s.com.au/wp-content/uploads/2017/02/skifflogo2.pngManly 16ft Skiff Sailing Clubhttps://manly16s.com.au/wp-content/uploads/2017/11/lee-sails.jpg200px200px
0
Manly boats fill four of the top 10 places in the overall standings after the first two heats of the NSW 16ft skiff championships were sailed on Lake Illawarra last weekend.
Equal third-placed Lee Sails (Sarah Lee) leads the Manly charge, one place ahead of Fluid Building (Clint Bowen) with Manly Surf n Slide (Joe Turner) in sixth and Cunninghams Real Estate (Nick Connor) seventh.
Brydens Lawyers (Lee Knapton) from Manly’s southern club St George Sailing Club on Botany Bay leads overall on a comfortable 3 points.
Lee did it the hard way, fighting her way through the fleet to finish eighth on Saturday before going four places better the following day after another tough battle.
“Both races didn’t start too well for us. We got off the line well but found ourselves pretty deep in the fleet at the first top marks,” she said.
“It meant us having to work hard to get back in the top 10 when it would have been preferable to round the top mark towards the front of the fleet.”
Conditions were fickle on both days, the patchy wind ranging from five to 15 knots with the shifts hard to pick.
The performance of Lee and crew members James Slee and Chris Goluzd to go back-to-back top 10 was even more meritorious when you consider their recent lack of sailing.
“We haven’t been on the water as much as we’d like to be and have missed a few races,” Lee explained.
“It was a good weekend given the lack of time out there. Hopefully we can start to get a bit more sailing in at Manly.”
Turner enjoyed the early state championship lead after taking out the first heat on Saturday.
But a 14th on day two left Manly Surf n Slide living up to its name, dropping back to sixth on the standings.
It was almost a complete reversal for Fluid, who overcame a disappointing 12th on day one to finish second 24 hours later.
The action returns to Manly on Saturday for the eighth heat of the club’s annual pointscore series allowing boats a final tune up before the final two heats of the NSW Championship are held on home waters the following weekend. 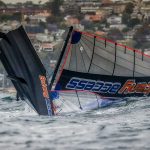