Turning your life upside down

This is the moment the world turned upside down for the crew aboard 16ft skiff Botany Access.

Skipper Chris Thomas had his boat set for a top three finish in heat two of the Manly club championship until coming a cropper on the final downward run.

As Michael Chittenden’s spectacular photo shows, Thomas and crew Ryan Thomas and Chris Williams cartwheeled out of control at great speed in the choppy conditions.

“You’re not quite sure what’s happening because it happens so quickly,” Thomas said of the spill.

“You just tried to get the boat up as quickly as possible and got on with the race.

“We pulled up okay but there were definitely a few bumps and bruises.

Botany Access was fourth before the capsize and did well to recover and claim sixth spot.

We’re just having a lot of problems with the boat and not having a great deal of luck,” Thomas said.

“Week by week we are ironing out the problems.

“Hopefully we can continue to improve as the season goes on.”

There are no teething problems for Turner and his crew aboard Sutech.

Their intentions have been clear from the start of the season – collect as much silverware as possible.

Daniel Turner held off brother Joe to win by 16 seconds, with Fluid more than a minute behind the front two.

Next weekend will see the fleet of skiffs head south to the waters of Lake Illawarra near Wollongong for the first two heats of the NSW State Championship. 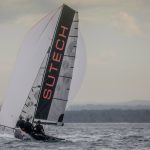