There’s an old saying that if it ain’t broke, why fix it?

That’s exactly the attitude the crew aboard Typhoon will be adopting as they prepare to take on the country’s best at next month’s Australian 16ft Championships on Middle Harbour.

After claiming second spot at last weekend’s Upper Harbour Championship at Drummoyne, Nicholls and crew Jay Harris and Mitch White will spen as little time on the water in the lead-up to the week-long regatta.

“We will race at Manly this Saturday and then you won’t see us on the water until the first heat of the nationals,” Typhoon skipper Craig ‘Fast Ed’ Nicholls said.

“We were talking about going out to practise but, as Jay pointed out, it’s taken a long time to get to this stage to get everything right.

“We’ve got the boat and crew work where we want it so why risk stuffing anything up?

“We all know how to sail and we’ve fixed everything on the boat we needed to, so we just need to go out there and do it.”

Nicholls has been competing at the nationals for more than 30 years and knows what it takes to secure a podium finish.

He is aiming for at least a top 10 finish at Middle Harbour – and the runner-up finish at Drummoyne indicates that is well within reach.

“My guys sailed the perfect race. There wasn’t one error the whole day and I was very proud of them,” Nicholls said.

“It’s also the first time we’ve used the big headsail and it definitely made a difference, as did me staying in the boat playing with the ropes.

“I won’t talk up our chances at the nationals but we’re confident of doing well if a few things go our way and the conditions suit.”

Racing resumes at Manly this Saturday with the fourth heat of the club championship. 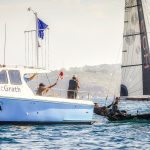