Oh brother, it’s all in the family for a title

THE family feud over which is the premier boat in the Manly fleet will go down to the final race after Surf n Slide won the penultimate heat of the club championship.

Sutech (Daniel Turner) headed into Saturday’s race just ahead of Surf n Slide but lost plenty of ground after fading away to eighth.

SnS now has a two-point advantage over Sutech on the overall pointscore.

It means the Turner brothers — Daniel and regular SnS skipper Joe — will thrash it out for the club championship in the final race on March 10.

Joe Turner missed Saturday’s race due to prior commitments but stand-in skipper James Dorron hardly missed a beat in piloting the skiff to a 27-second victory.

After a series of seconds and thirds through the championships, it was a timely win.

“We’ve been very consistent but a bit of bad luck here and there or some poor race management has cost us wins,” for’and Rob Napper said.

“In the context of the series we were never that worried about getting wins as we just wanted to be consistent but it was still nice to get this one.”

The win has SnS in the box seat to complete the national and club championship double.

“There’s three big titles you aim for at the start of the season — national, state and club,” Napper said.

“The nationals are a step up but the state and club are held in the same regard by us.

“(Sheethand) Trent (Barnabas), Joe and I have never won one together so it would be a great way to finish off the season.”

In a glimpse into the future at Manly, the young crew aboard Cunninghams (Harry Price) pushed SnS all the way to finish second on Saturday. 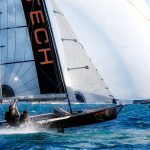