They say no-one is irreplaceable, but Hugh Cooke was the closest thing to it.

He was Manly 16ft Skiff Club’s ‘everywhere man’, selflessly giving back to the sport and those involved in it for more than five decades.

The local sailing fraternity is now in mourning after Hugh lost his life in a car accident just outside of Dubbo on the Queen’s Birthday weekend.

Hugh’s links with sailing go right back to when he was a young boy and started as a bailer boy on the 12ft skiffs in Neutral Bay. Later he would join the VJ fleet at Middle Harbour.

This led to a lifelong friendship with many sailors who would go on to later success, including Bob Holmes and Rod Zemanek. These were to bring as many trophies as it did laughs and good times.

After a stint in the 16ft skiffs at Middle Harbour, Hugh joined the crew of 18ft skiff Schemer skippered by Ken Beashel. They traveled to Auckland in 1963 to win the 18ft skiff championship, the JJ Giltinan Trophy.

When Ken returned to the 16s, Hugh and Bob Holmes joined together to sail the now sponsored 18 known as Travelodge which they went onto win another four JJ Giltinan trophies, again in Auckland in 1965 followed by 1966, 1970 and 1971.

Cooke and Holmes combined for some ingenuity in the lead-up to the 1969-70 regatta on the Brisbane River.

The pair managed to get the feel of the river by befriending crew on an old prawn trawler and asking them to run up and down the river with an oar to test the depths, so they would know where to sail without running aground.

And Hugh made sure each win was big news.

He and Bob were good friends with The Sun newspaper reporter Henry Hays and fed him enough stories to last years.

If there was nothing special to tell, they’d come up with something to generate a headline.

They cheekily told Henry they were practising sailing an 18 on Manly Dam so none of their rivals could spy on them.

They also generated the odd ‘capsize’ to ensure a guaranteed splash in the next day’s paper.

1972 saw Hugh retire from 18ft skiff sailing and the last newspaper article at the time said “Hugh Cooke was known for his toughness and fast spinnaker sets as well as designing half of the top boats.”

By this time family life was calling and Hugh was now a doting father to 3 children, his new job as a Shipwright Surveyor for the Maritime Services Board which combined his boat building and naval architecture knowledge had Hugh’s services sought throughout NSW.

However, saltwater and the rustle of skiff sails saw Hugh come out of sailing retirement in 1973 for one last final season in the 18 footers with Hugh Treharne in the Booth Holden going on to win the State Championship.

Hugh joined the Manly 16ft Skiff Club in the mid-70s, sailing in the F11s class with his children Gavin and Phillip along with winning the season point score in 1981 with daughter Ellen.

He competed right up until the 1981-82 season before throwing his time and energy into sailing administration including a training program for the juniors, which was always such a strong passion of his.

There was no job too big or small in Hugh’s life.

Hugh was a person of great integrity. In 1982 America’s Cup measurer Ken McAlpine contacted Hugh and asked that he assist with the measuring of a new 12 metre yacht. They required someone they could trust. Hugh agreed and flew to Perth, was sworn to secrecy and went on to measure the Australia II.

The following year Australia II made history and broke 132 years of history to win the America’s Cup with Hugh being one of the very few that exactly knew what the keel looked like. He wouldn’t even tell his own family or friends!

Hugh remained a big part of the Manly club right through the decades becoming Commodore and a director in 1992 holding that position for 14 years, with the Club honouring him with Life Membership in 2005. He then went on to join the club race management team as assistant starter right up until till his passing.

Hugh provided wise counsel on race days and at meetings, maintaining a cool head while others around him were losing theirs.

Many have described him as ‘like a second father’.

“Over many decades Hugh has steered the Manly ship with distinction as Commodore, race starter, skiff rescue, award presenter, committee member, boat builder and repairer right through to turning sausages on the club BBQ.

“Hugh was quite possibly the nicest, most genuine, humble and all-round good person you could ever meet.

“We will all miss having a beer and yarn with Hughy.”

Hugh is survived by his loving wife Faye and family:

Gavin and Hyun and their children Oliver and Juliet.

Ellen and Sean and their children Nathan, Jesse and Maya. 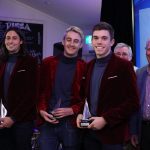 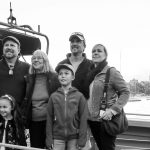