I’d fallen out of love with sailing….

By the end of the 2013 season, Matt Taylor’s love affair with sailing was well and truly over.

He’d been at it for almost two decades after starting out as a young boy and had simply lost all desire to keep going.

For the next four years, Taylor sailed in the odd race as a fill-in but otherwise consigned the sport to the past.

But as the 2017/18 season approached, Matt’s younger brother Ben heard word of a 16ft skiff for sale at Manly and started making discreet enquiries.

That boat was Namotu and a comeback was hatched.

“Ben found a boat for sale and he was the one that pushed the idea initially,” Matt said.

“I’d fallen out of love with the sport and got on with other things but he asked if I wanted to come back and it seemed a good opportunity and the right time.

“He paid a bit of money up front for the boat and it went from there.”

The Taylor brothers reached out to another old sailing friend, Nick Brunning, to complete their crew and joined the red-hot Manly fleet for their first taste of 16ft sailing.

After months of breaking gear and struggling to stay upright, Namotu finally found itself at the right end of the fleet last Saturday, claiming handicap honours in the 13th pointscore race of the season.

Team Tiger (Rod Waterhouse) was 30 seconds behind in second place, followed by Allow Our Name (Daryl Milham) in the 12-18 knot sou easter.

Botany Access (Chris Thomas) was first across the line on scratch, with Typhoon (Craig Nicholls) and Bart (Chad Beeby) filling the minor placings.

“Early on in the season we struggled to get around the course and not go in the water. Just finishing races was a challenge,” Taylor said.

“It’s been an up and down season but it’s starting to come together.

“Saturday felt good. There were no mishaps and we sailed a pretty good race.”

The Namotu comeback will kick up a gear next season, with the crew planning to increase their commitment.

Meanwhile, Manly will welcome back a host of former sailors for its annual Old Buffers Day on Saturday. 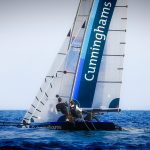 A Shock Result but his rivals were not at all surprised…..16ft Skiff News, Manly 16ft Skiff Sailing Club 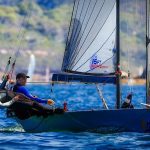